The third day began at the Kirk House, with breakfast at the place. We remembered that last year it was fairly yummy although this time around it seemed to be more on the exotic side. The breakfast parfait was still good — although not everybody got granola, in which case it just plain sucked (plain yogurt just plain sucks, I don’t know if anyone would care to disagree?).

We hit the road and made our way to the English Camp. Driving anywhere in the island is akin to perusing through a set of really cool postcards, and the drive to the camp was no exception. As we got close to the parking area we encountered deer grazing on grass by the camp site. Last year we visited the American Camp, which is the larger of the two. The English counterpart didn’t have all the historical markers the American camp has. While the American camp was full of how life hard was and how the soldiers and staff there had a miserable time, the British camp was all about trees and gardens.We walked about a bit and and saw most of it, but cut the trip short and got back on the road.

We made our way back to Lime Kiln Point Park. We had stopped there last year and actually got to see several killer whales from the coast. We didn’t expect to see any that day, and we didn’t. It was still a nice stop — we walked down a trail and visited the Lime Kiln lighthouse. We would later drive down the coast and got close to the other lighthouse on the island, but just like last year we couldn’t find out how to get to it. We spent some time catching the breeze on the rocks by the beach, and made our way back to town. We took the long way around on a less-traveled road and spotted some more deer and foxes. 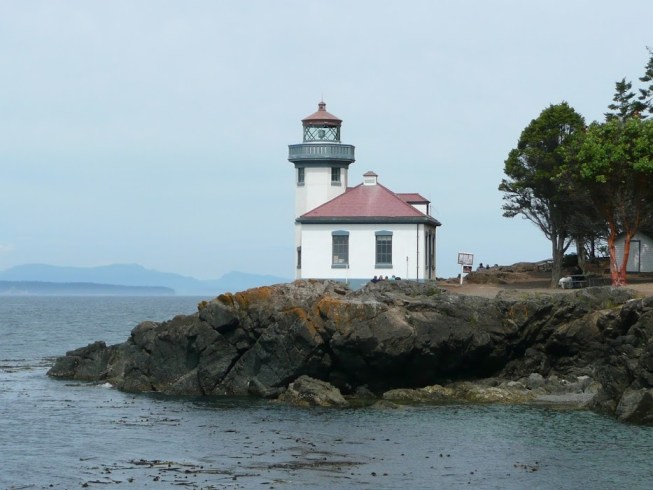 Approaching the English camp and getting greeted by one of the natives: